Represented South Africa at the 1960 Winter Olympics, where she placed 25th.

Marion “Penny” Sage(born 1943) is a South African figure skater representing South Africa at the 1960 Winter Olympics, where she placed 23rd. 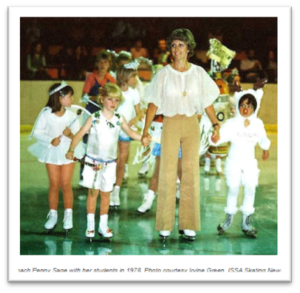 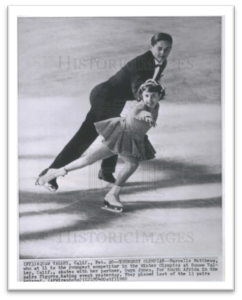 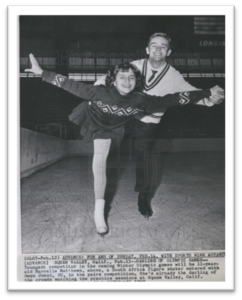 Having just been re admitted into the world of international figure skating in 1992, nobody thought it would be possible for an athlete from a predominantly Olympic event. He secured automatic qualification for the games at the World Championships held in 1993 in Prague. He received an all-over World ranking of 18 at these Championships, providing him with a spot at the Games the following year as one of the top 30 in the world eligible to compete.  He would also be the first representative of an all-inclusive, multi-racial team representing South Africa at a Winter Olympics event.

They were made to feel like national heroes and departed on the 3rd of February 1994 for their trip to the Olympics.  Carried by the National Carrier SAA, they were given a special Captains welcome on the flight, and their Olympic journey had officially begun.

Their arrival at the Olympic Village was a special event as each Nation had a set time upon arrival to raise their country’s flag in the village and play the National Anthem.  South Africa was very much during its transformation and still deciding on a new flag and anthem.  This would not be a stumbling block for the small team and would carry the white flag with the Olympic rings and the ode to joy as our Anthem.  It was a very proud and special moment as their flag was raised, indicating the official arrival of Team South Africa at the Olympic games of 1994.

Treated like superstars in the Olympic Village, they were made to feel extremely welcome.  They had their own South Africa house, and it was decked out with all the bells and whistles that Olympic athletes must come to expect from the Olympic village.  Team kit sponsored by Reebok was received; he felt like he was a part of history.  It would also be his 21st birthday at these games on the 13th of February, and Reebok provided a fantastic party for him to celebrate the occasion.  At this party, he would have the extreme honor bestowed upon him of being told that he would be carrying the flag at the opening ceremony and the parade of athletes.

The 12th of February was this momentous occasion, and he was filled with absolute pride as he entered the complete white stadium holding the South African Olympic flag up high.  The opening ceremony felt like a dream, and it was possibly the highlight of his competitive skating career.

The rest of the Games were pretty much a blur.  Official practices took place twice daily.  He was in the best shape of his life and skating very well.  That was until two days before the short program where he managed to pick up an injury to his left front tendon on his foot.  He was advised not to compete because the swelling was so intense.  He was not going to be told by anyone that after working for 11 years of his life, he would not be taking this opportunity to represent his country.  He was granted special permission from the IOC to have a cortisone injection directly into that tendon before skating.  Boots were laced, and he managed to fulfil his lifelong dream.  Admittedly, it was not his best performance.  After the free programme, he walked into the mess hall and received a standing ovation from all the athletes participating in other disciplines.  Not understanding what was going on, he explained that they were standing because he never gave up.  He was having the worst skate of his career, but he kept trying to the very end.  It was at that point that he realized what the Olympics were all about.  Regardless of whether medals are won or lost, it is all about being there and competing.  He had qualified as one of the 30 best athletes in the world, he had represented his country with honor and pride at the biggest sporting event on the planet, and no one would ever be able to take that away from him.  Dino was placed 24th in the Olympics.  He took a break from competitive skating and then came back to win the South African National title from 2001 through to 2003.

He has 21 years of coaching, and his achievements as a coach include coaching South African National Championships in the pre-novice girls, novice, and senior ladies.  He’s taken skater to represented South Africa at numerous ISU international events.  He is a qualified solo, pairs, and synchronized skating coach.  Dino is a Senior SA National Technical Specialist and a National Coach. 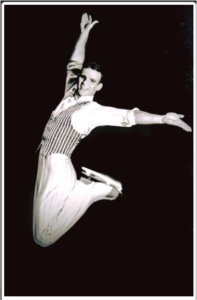 My love story with figure skating started at the young age of 4. My father, Tom Human (who played ice hockey), had purchased a pair of hockey skates for my brother as a birthday present. I went with to the ice rink and stood patiently at the side of the ice rink, just dying to get onto the rink to skate. After a substantial amount of nagging, my father buckled and went to find a small pair of rental skates. From the moment I set foot on the ice, I just knew that this was where I was meant to be; it was “my happy place”.

My skating career began in the skating school. One of the coaches who trained me in basic skating skills was Patricia “Pat” Eastwood, who competed for South Africa in the 1960 Olympic Games in Squaw Valley, placing 25th in ladies solo figure skating.  I started with private lessons just after my 5th birthday in January 1985 with Sue Winger every Tuesday. I participated in my first competition in November 1985, winning the Under 6 Novice Section at the Skyrink competition.

In May 1986, I changed coaches to Marion Scher and had four lessons a week. I changed coaches again in August 1987 to Karen Huth as my main coach and Marion “Penny” Sage as my choreographer. Marion Sage had also competed at the 1960 Olympics in Squaw Valley and came 23rd in ladies Solo figure skating.

My parents allowed me to travel to London in December 1991, and Claire Auret and Chris Van Rensburg to do a month of training at Queen’s ice rink.

I moved up in 1992 to the Junior National section and became the National champion at 12. I later went on to win a total of 13 National titles (Under 12, 3 Junior and 9 Senior). I was undefeated for 12 consecutive years and held the record for the most Senior national titles ever won for Senior ladies.

During my entire figure skating career, I always believed that one day I would have the opportunity to represent my country at international competitions, Junior Worlds, Senior Worlds, and the highlight of any athletes’ dreams, the Olympics. South Africa had one big problem: as a country, we were excluded from competing at all three of these events. I never let this phase me and always trained hard, believing more than anything in the world that I would one day achieve my dreams. South Africa had been excluded from these competitions due to apartheid. However, in 1990 South Africa was able to re-join the Olympic movement after the negotiations to end apartheid commenced.

I finally had the honour of competing for my country at my first Junior World Championships in December 1992 in solo ladies, in Seoul, Korea. My teammate was Paul Slabbert, who was going to compete in the men’s division.

Over the years, I have had many challenges to overcome, between changing coaches, moving provinces, moving countries, and dealing with injuries, all in the effort to become the best figure skater I could be.

I trained over the years in many different countries, including Toronto, Canada 3 months on and three months off, of the year when I was 13, a month with Carlo Fassi in Milan, Italy, moved to Lake Arrowhead, California, at the age of 15 to train with Frank Carroll (who then coached Junior and Senior World Champion Michelle Kwan) as well as my final international training ground of Cleveland Ohio.

In Cleveland, I trained with Carol Heiss Jenkins, the 1956 Olympic silver medallist and the 1960 Olympic gold medal winner, and a five-time World Champion in ladies figure skating. In 1953 Carol Heiss became the first female figure skater to land a double axel. One of her trademarks was that she would perform a series of alternating clockwise and counter clockwise single Axels. Some of her former students include Timothy Goebel (I trained with him), Tonia Kwiatkowski (I trained with her), and Miki Ando.

The two and a half years that I spent with Carol and Glynn Watts (my choreographer) formed a large part of my career as a figure skater from South Africa.

I went to senior worlds with Carol in 1997 and ended up not making the cut to qualify for the Olympics and was so disappointed; I did, however not let this get me down and later went on to do a second qualifying competition. This too ended up with a second disappointment for me as I missed qualifying by two places.

On Christmas eve 1997, I received the best Christmas gift I could ever have hoped for. I would be competing in the 1998 Olympic Games in Nagano, Japan.  This became my most significant achievement and everything I could have ever dreamed of. I not only got to compete at Olympics, but I also got the opportunity to carry the flag in the opening ceremony.

It took me a long time to get over the fact that I had finally reached all my dreams, and it was really difficult to reset my goals after Olympics.

Even though I have been out of the sport since 2005, I keep in touch with many of the coaches and stay up to date with the changes in figure skating. I am always interested in the up-and-coming talent in the country.

Nagano, Japan – 1998 (I was also the flag bearer in the opening ceremony) 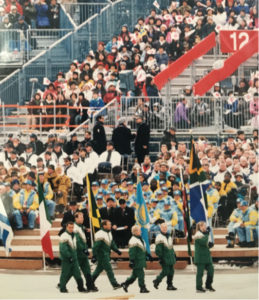